A motive has yet to be determined in the ongoing investigation of the attack against House Speaker Nancy Pelosi’s husband, Paul Pelosi, but there have been no shortage of reports connecting the alleged attacker to conspiracy theories including a story from a daughter explaining he did “try to be a good person but the monster in him was always too strong…”

Early Friday morning, San Francisco police arrived at Pelosi’s home on a well-being check after a call came in from Paul. It was there that they arrested 42,year-old David DePape, said to be in his underwear, after he allegedly struck the homeowner with a hammer.

San Francisco Police Department Chief Bill Scott explained at a brief press conference Friday, “When the officers arrived on scene, they encountered an adult male and Mrs. Pelosi’s husband, Paul. Our officers observed Mr. Pelosi and the suspect both holding a hammer. The suspect pulled the hammer away from Mr. Pelosi and violently assaulted him with it.”

According to Scott, DePape was booked at San Francisco County Jail for “attempted homicide, assault with a deadly weapon, elder abuse, burglary and several other additional felonies.”

As media attempted to uncover the suspect’s background, CNN’s Whitney Wild reported her outlet “reached two of the man’s relatives who told CNN he is estranged from his family. A review of his FB page shows he posted memes and conspiracy theories about Covid, the 2020 election, and the 1/6 attack.”

.@SFPD identified the alleged attacker as 42-year-old David DePape. @CNN reached two of the man's relatives who told CNN he is estranged from his family. A review of his FB page shows he posted memes and conspiracy theories about Covid, the 2020 election, and the 1/6 attack.

DePape’s estrangement was corroborated by a report from the Daily Mail regarding a blog post by Inti Gonzalez, described as the daughter of the suspect, who had written a blog entry Friday where she claimed that she and her brothers had been sexually abused by her father and went on to express, “He did genuinely try to be a good person but the monster in him was always too strong for him to be safe to be around. He grew up in an intensely abusive home.” 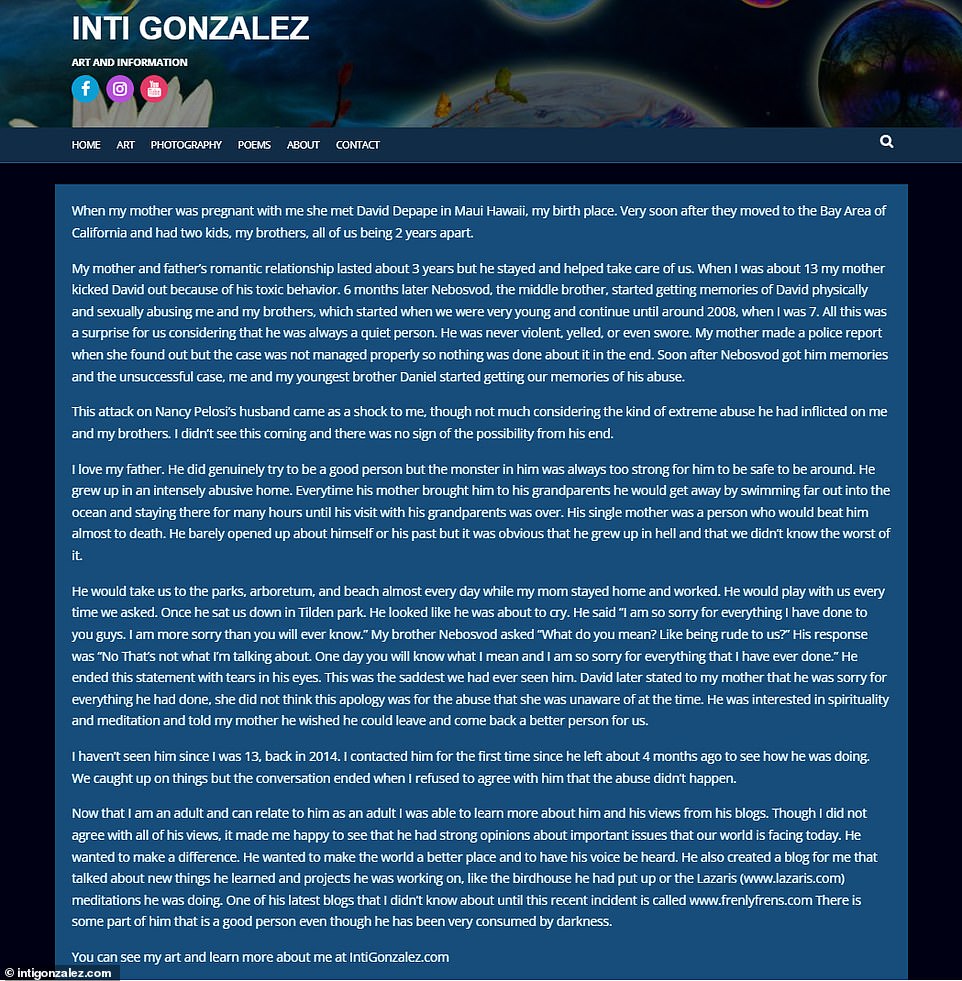 Attempts to access the site reveal that the account was suspended, but the blog went on to state that his mother “beat him almost to death. He barely opened up about himself or his past but it was obvious that he grew up in hell and that we didn’t know the worst of it.”

Gonzalez also noted that DePape, “had strong opinions about important issues” many of which have been a focus in assigning motive to the alleged assault. According to KTVU, “authorities found a manifesto” that belonged to the suspect that “contained conspiracy theories and anti-government COVID beliefs. He also allegedly had a list of other politicians he planned to target.”

Among writings that have been attributed to DePape was a blog titled “Welcome to Big Brothers Censorship Hell” where heavy.com said he wrote about former President Donald Trump, Kanye West and the death of George Floyd wherein he said of the latter, “The only person who is owed damages is Derek Chauvin,” the officer found guilty for Floyd’s death despite, as DePape wrote, “The autopsy [showing] a FATAL level of [fentanyl] in his system and that he had died of a heart attack consistent with the symptoms he was exhibiting prior to being placed on the ground.”

A blog run by David Depape, the Berkley man accused of attacking Paul Pelosi with a hammer, has articles titled 'Hitler did nothing wrong,' 'Black pilled,' and 'Pedophile normalization.' pic.twitter.com/BNkfV46CyC

Heavy also noted that there was no direct mention of Pelosi or other leading Democratic figures like the Clintons or Obamas, while CNN reported DePape had been asking “Where’s Nancy?” during his interactions with Paul at the San Francisco home.

The 911 operator who responded to Paul Pelosi’s call while the suspect was in his home relayed to police, “He states there is a male in the home and that he is going to wait for his wife. He stated that he doesn’t know who the male is but that is name is David and that he is a friend. He sounded somewhat confused.”

1/2 Initial dispatch recordings from response to calls from the Pelosi residence from around 0230 this morning. https://t.co/g7OhA9pT2W pic.twitter.com/CyGAMRgsvz

The Mail documented other content from the suspect where “He posted obscene versions of Disney songs from YouTube included one titled: ‘Do you want to **** a snowman?’ He posted a screed containing the n-word, and a post titled ‘This is what a dumb b***h looks like’. Others were titled: ‘Noah survived the collapse of Atlantis’, ‘Pedophile normalization’, ‘Facts are Racist’, ‘Communist Voodoo science’, ‘I’m not sexist’ and ‘Feminist gets owned’.”

A press release from the speaker’s office updated the public on her husband’s condition stating, “Mr. Pelosi was admitted to Zuckerberg San Francisco General Hospital where he underwent successful surgery to repair a skull fracture and serious injuries to his right arm and hands. His doctors expect a full recovery.”

As a joint investigation continues with the San Fransisco Police, FBI and even the United States Capitol Police, President Joe Biden reacted to the news at a fundraiser in Philadelphia Friday and said, “This is despicable. There’s no place in America. There’s too much violence–political violence–too much hatred, too much vitriol. And what makes us think that one party can talk about stolen elections, COVID being a hoax, this is all a bunch of lies, and it not affect people who may not be so well-balanced? What makes us think it’s not going to corrode the political climate?”

“Enough is enough is enough. Every person of good conscience needs to clearly and unambiguously stand up against the violence in our politics, regardless of what your politics are,” he added.